Drones and other innovative technologies can help make up for the lack of available human resources.

The Danube River, its vast Danube Delta and the Black Sea coast are very large areas that need to be kept under surveillance to detect and prevent illegal fishing of critically endangered sturgeons. However, only rather few law enforcement officials are available to monitor large stretches of river or coastline. The limited patrols are not sufficient enough to counteract poaching. Illegal activities can take place day or night, and poachers often possess high-quality equipment and less restricted resources.

Nevertheless, quite simple tools like surveillance cameras can be very helpful, as a test case in Ukraine has shown. In the frame of the EU-funded project “LIFE for Danube Sturgeons,” a rotating camera with external control was donated to Border Guards in Vylkove and installed at a stretch of the Danube Delta where poaching of sturgeons is known to happen. As a result, illegal fishing in the controlled sector stopped and Border Guards even watched fishermen release sturgeon by-catch.

To get a better understanding of available technical opportunities, their benefits and limitations, the third LIFE for Danube Sturgeons online workshop focused on innovative techniques in fishing control. Similarly to the previous two workshops - on engaging fishing communities in conservation and alternative income development initiatives, several well-known experts in the field joined to exchange experiences with the project team.

Melissa Schiele (PhD Student at Loughborough University, England) develops and tests UAVs (Unmanned Aerial Vehicles, commonly known as drones) for surveillance in hotspots of illegal, unreported or unregulated fishing. She shared experiences of her work with water-landing fixed-wing UAVs in the British Indian Ocean Territories and in Belize to detect illegal fishing and illegal fishing gear. Together with her supervisor Simon Pomeroy (Lecturer on Unmanned Aerial Systems at Wolfson School of Mechanical, Electrical and Manufacturing Engineering, Loughborough University), Melissa explained the high potential of applying UAVs along the Lower Danube and Black Sea, and described some necessary preparatory steps. “It is important to know which kind of evidence of poaching is necessary to enable authorities to start investigations – it is not enough to just fly a drone around.” - advised Melissa Schiele.

Daniel Leonte (National Institute for Aerospace Research, Romania), who applies UAVs together with police forces in the Romanian Danube Delta, also joined the sturgeon project’s workshop. He reported very good results, not so much to spot poaching but other threats such as fires or biohazards. Although employing drones to deter illegal fishing is not something Daniel Leonte’s colleagues are currently doing, the Romanian National Institute would be very interested in the activity and its results.

The third expert - Alfred Schumm (Director - Innovation, Sciences, Technologies & Solutions, WWF- Germany), explained general preconditions to use remote surveillance techniques and gave an overview of potential systems that could be used to prevent poaching. For example, he cited radar-satellite systems, Automatic Identification Systems (AIS) and other position tracking systems that use transmitters on fishing vessels to track fishing boats and to detect poaching by analysing speed and movement patterns. Another tool is electronic observer systems with cameras on vessels that enable real-time identification of fish sizes and even species such as sturgeons in catches.

“We will use this valuable knowledge and advice to support law enforcement authorities in their attempts to apply innovative technology to fight sturgeon poaching,” says Cristina Munteanu, Sturgeon Project Coordinator in Romania. Munteanu  leads the application for a follow-up LIFE project that includes the testing of UAVs, fixed cameras or sonars to stop illegal fishing activities, and in particular, sturgeon poaching. Capacity-building in law enforcement continues to be pivotal for the project team, and directly links with their efforts to reverse wildlife losses in Europe and hinder the speed of climate change.

Biodiversity must be protected in order to protect our own health as well as the planet's. This is why the EU Biodiversity Strategy under the European Green Deal must do more to protect critically endangered species like sturgeons, provide a strong push towards shutting down illegal wildlife trade, and preserve ecosystems such as the Danube and old-growth forests. Future pandemics will only be avoided if people learn to live in harmony with nature.

Background:
WWF is engaged in sturgeon protection measures in most Danube countries, for example through the Life for Danube Sturgeons Project. Sturgeons used to be present in almost all European rivers, but today seven out of the eight species of sturgeon on the European continent are threatened with extinction. Sturgeons have survived the dinosaurs, but now teeter on the brink of extinction. The Black Sea Region is crucial to the survival of these species in Europe. The Danube and the Rioni River in Georgia are the only two rivers remaining in Europe where migrating sturgeons reproduce naturally. The main reasons are overfishing and loss of habitat through dams that block migration routes or in-river constructions, facilitating navigation. These are often detrimental to the feeding and spawning habitats, necessary for sturgeon survival. Within the EU the only river with naturally reproducing sturgeon populations remains the Danube. Crucial but no longer reproductive stocks are left in the Po River in Italy and the Gironde in France. Restocking activities take place in Bulgaria, Hungary, Romania, France, Germany, Poland, Austria and the Netherlands. Our priority is to identify and protect the critical habitats of the remaining four sturgeon species (Huso huso, Acipenser stellatus, A. ruthenus, and A. gueldenstaedtii) in the Lower Danube and north-western Black Sea, as well as to reduce pressure on their remaining populations by addressing poaching and ensuring protection. 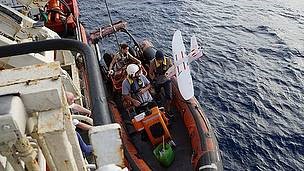 The LIFE for Danube Sturgeons Project is investigating the use of innovative solutions such as drones, radar-satellite systems and Automatic Identification Systems to stop sturgeon poaching. 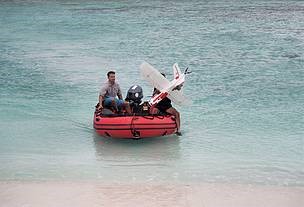 Only rather few law enforcement officials are available to monitor large stretches of river or coastline to counteract illegal fishing. 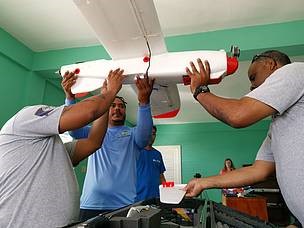